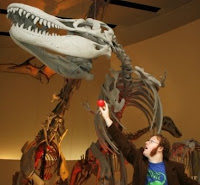 By Ben McKenzie, Janet A. McLeod and Andy Muirhead

Dishing out laughs and information in equal measure, The Melbourne Museum Comedy Tour is a uniquely enjoyable way to experience one of our major institutions.

Hosts Ben McKenzie, Janet A. McLeod and Andy Muirhead (of television’s Collectors fame) take turns guiding the audience through specific museum exhibits. Dinosaurs – and the dinosaurs of the computer age – are the domain of the enthusiastically geeky McKenzie, who cheerfully points out the inaccuracies of Jurassic Park and the dangers of killing an albatross. McLeod overseas the marine leg of the tour, cracking gently risqué jokes about giant squid and hippy dolphins; leaving the charismatic Muirhead – a trained entomologist – to highlight the wonders of the insect world.

While the quality of the jokes sometimes leaves a little to be desired, the pace of the show means there’s little time to brood before racing onto the next exhibit. A (mostly) family-friendly mix of facts and fun.

This review originally appeared in The Age on Wednesday April 22.

Posted by richardwatts at 7:40 pm